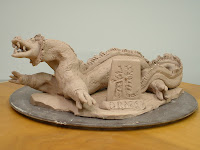 This was animal week. One of my students wanted to make a dragon sculpture, so we started with a platform of clay, then made hollow tubes for the head, body and legs of the creature. Texturing was done on the tubes, then all joined together. I had a terrific time helping. After it was finished, I kept going back to it during the day just to admire it.

Clay can take on such a life of it's own. Even after 10 years, the transformation of formless, shapeless plastic (as in "able to be shaped and formed"--not as in "the thing that everything now is made from") material into a physical object still delights me.
Posted by Vicki Gill, potter at 11:06 PM 2 comments: 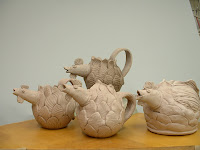 We had a hen house party at the studio this week. My handbuilding class worked on these chicken pitchers and I think they turned out great. They were pretty challenging. We used a cookie cutter to cut out the feather shapes, then joined them together inside a bowl. After a few rows, we took them out of the form and continued to build up the sides using the cut shapes. Can't wait to see them glazed!
Posted by Vicki Gill, potter at 10:49 PM No comments:

A friend had requested I make a covered jar for her, based on a photo on my website. I was using carved cinnabar beads for the original ones as the knob, but don't have any of those, so I made some out of a dark red clay body and fired them separately, then epoxied together. It would make it easier if both clays fired at the same temperature, but do not.

After these great firings, I took a lot of photos. I used to take my own shots, set up in a dark room with bright lights and a sheet for a diffuser and after several hours of photographing work, you hoped for the best with your slides. Then I started to use Randy McNeilly, a photographer who is great, to take images for shows, my website, etc. But for the blog, and to have photos on the fly, I am back to setting up a temporary photo shot in the studio. Digital cameras make it much easier and you know what you got immediately for the most part.

We had Lana Wilson, a great potter from California, as a workshop instructor for Carolina ClayMatters Guild, several years ago. She said her family could tell when she had a great firing because she made a great dinner. Ben Owens said it's like Christmas. It is very exciting to see what has come to life in the firing!

GREAT WEEK!!! Hope yours was creative as well!

This is a new basket. Very wide--had to manipulate my kiln furniture to fit in for the bisque firing. I have gotten so ambitious before that I have made something too wide for my kiln. I try to remember to check when I think I am close to exceeding the dimensions of my bottom shelf.
Posted by Vicki Gill, potter at 11:09 AM 1 comment:

Last week was a great week at the studio. I had two very nice firings. I have been working on some special pieces and both firings were rewarding! You can see the dragon tray as I worked on layering glazes, one over the other. This was an experiment of how these glazes would react with one another and I like it. I will try some more with this technique. Maybe add more color in the sky background. The dragon is carved into the clay when leatherhard.
Posted by Vicki Gill, potter at 11:00 AM No comments:

Two things seem to be pretty consistant at the studio, no matter what else happens. There is always someone who will come in with a pet, looking for the animal hospital and have a most curious look on their face when confronted with lots of pottery. And there is always a phone call or face to face with someone looking for a place to paint on pottery. The first event happens because the studio was formerly a veterinary hospital for a very long time (about 30 years). The second event happens because-?????? In my crazier moments I have considered making or carrying bisque ware for the folks who just want to paint. However, I manage to talk myself out of it when I consider where I would store the underglazes, work, how I would fit it into my firing schedules for my production and my classes.......... 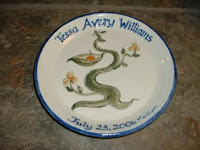 Earlier this year, I did have fun doing a personlized plate for the birth of a child. I do think this is something I might pursue on occasion. Here's a picture of it.
Got to run to work. Classes to teach, pots to make and glaze, etc.
Posted by Vicki Gill, potter at 9:22 AM No comments:

Clean up and spruce up 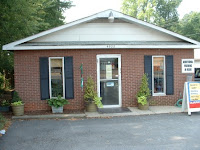 Today was a "clean house" day at the studio. I have been moving tables around in the hand building section, trying to get an arrangement that I am happy with. Of course, when you move one thing, it leads to another, and at the end of the day I had cleared out cabinet space, gone through all my forms that the class uses to slump clay in, moved shelves, reorganized the texturing stuff, set up new shelves for the clay storage and put away glaze materials that have been sitting out for a good month. Tomorrow I plan on dusting and mopping from front to back and then everything should be in it's place and I can start throwing again.

Sometimes when I have a lot of unfinished things going on at once, it helps me to focus on getting the clutter out of the way physically. Then my mental space seems to free up.

I got the proof for my new "sandwich" sign today. The wooden one that my son built for me 2 years ago has about had it. The new one will be an improvement over the chipped and peeling one. I have been moving towards slowly sprucing up the exterior of the gallery. My friend put up some shutters on the front windows and I planted some nice big planters with Alberta spruces and potato vine. After the fall shows I hope to get a colorful awning for the front door.

Over the next month or so, my friend Dan will open up a section of the wall between two of my gallery rooms. I think it will be nice to have the sense that you can see from one room to the next. Will try to get some photos of the changes as they occur.
Posted by Vicki Gill, potter at 10:12 PM 1 comment: