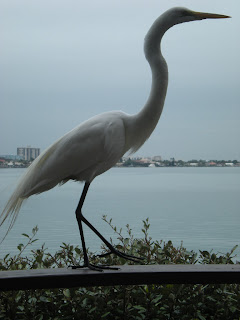 One of the "wild life" that makes eating lunch full of adventure. There are also grey herons and seagulls and smaller white birds that are even more threatening than this big guy. They hover and swoop and land on your table, beadly eyeing your sandwich. I think they are the Florida version of NC bears that have been fed and become a real problem. Besides not knowing when they will streak out of the sky and nail your food, they also can wreak revenge by letting loose a shower of bird doo. Oh so appetizing.....But I have gotten some nice reference shots for carving work on pots.
Posted by Vicki Gill, potter at 10:25 PM 4 comments:

Email ThisBlogThis!Share to TwitterShare to FacebookShare to Pinterest
Labels: birds

Connected Part Two- The Elegance of the Hedgehog

I finished a lovely book, "The Elegance of the Hedgehog" several weeks ago, just as I was reading a book by Bernard Leach entitled "The Potter's Challenge". The first book was written recently and is a work of fiction and the Leach book was published in 1951.
My favorite moments of the "Hedgehog" were the lines of the characters that spoke about moments of stillness of spirit and beauty and contemplation. In fact, a conversation between two of the characters was about why a Dutch Master's painting was so engaging to the viewer. It got me to thinking about why I love the artwork and music that I do. What threads run through the different mediums that work their magic on the viewer?
Then Mr. Leach managed to shed some light on it for me. In talking about how as a modern creator/artist/artisan (whatever title you are comfortable with) he says,
"We have to learn to put the thinking apparatus, our intellectual box of tricks into proper relationship with the intuitive parts of our mind. When they are properly related to each other we can still live in a world of thusness, or let us say, wholeness."
So those interactions with beauty, art or music, which sometimes stop me like the singing tone of crystal or porcelain in the still air and resonate through me are those moments of wholeness in the artwork.
He goes on to say
"I write of beauty, and truth and thusness. I think the final word I would use as a criterion of value in the world of art, if I were reduced to a single word, would be the presence of life.... It is a force that goes beyond all arts or artists. It is the ultimate standard and it is attainable."

I find great solace in the fact that it is attainable and know that all those shards and seconds and misfits and not quite rights are just mileposts on the road to bringing that life into the here and now of my pottery.
Posted by Vicki Gill, potter at 10:48 PM No comments:

Email ThisBlogThis!Share to TwitterShare to FacebookShare to Pinterest
Labels: Bernard Leach, Elegance of the Hedgehog, The Potters Challenge, thusness 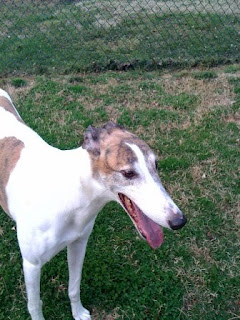 Jim sent me this nice photo of Cherokee. He's enjoying the spring time and great weather, waiting for me to get back to the studio and greet all you pottery lovers coming in to visit.

Connectedness is a topic I have been mulling on for quite a long time. So I thought I would give it a shot as a serial post. But to keep myself on track instead of just rambling, I decided an outline would be in order. Here it is:

Part One: Thoughts on connectedness and James Garner, past and future; not really connected to pottery except through my love of him and my love of pottery.
Part Two: The Elegance of the Hedgehog and The Potter's Challenge
Part Three: The Book of Hours and Scrapbooking
Part Four: Texture and the details of leaves
more as needed...... or maybe you should suggest something?

The mythologist Joseph Cambell talked about making lists as a way to sort things out (at least that's what I remember). You can read more about him in the book, "Joseph Campbell, A Fire in the Mind". I think from this exercise of list making you find connections between things. I tend to keep some running lists in my head, using the brain/mind as a file sorter and filter. Sometimes the lists are more felt, than realized. Sometimes the convergence of lists hits you like a brick over the head.

Anyway, I have this running list of work I have made in my background, so while browsing through a new pottery book "20th Century Ceramics", I turned a page and was stunned by a photo of a 1906 earthenware vase by Thorvald Bindesbell.. This pot is an homage to Hokusai's print. The "stunned part" was that I made a pot, very similarly shaped, using the same breaking wave patterns and the same color patterns quite a while ago. My pot sits on the mantle of my in-laws' fireplace. Wish I could show you, but no digital images. Maybe no slides, even, because I have never documented every piece that I made.

It has the same black background but texture created by carving. So I have been beating my brains, trying to figure out if I had seen this pot and subconsciously it wafted it's way into my work or if I was so influenced by the Hokusai print (I have had a copy of it hanging in my studio since 2000) that I strove to put that image on a pot of my own and now it looks like a copy of a long dead potter's work. The kicker is that I don't ever remember looking through the book I saw it in (first publish date 2003), I know I've never seen it in person and don't remember the image from elsewhere. I'm almost positive my pot predates 2003, because the clay body was one that I used while I took classes at Gaston College. It was a beautiful toasty body, part Gold Art and Red Art, that Keith Lambert used to have us make. I know I bought materials to make up a bunch of it before I stopped taking classes because I would no longer have access to the clay mixer. So I was using it and firing it in my kiln at home, taking the reduction glazes we used and the clay body and working in oxidation and at a couple of cones lower.

Now I know that I have looked at South American, Polynesian and Oriental pots and seen similarities in the design patterns that probably cropped up independently of one another. That's a whole big subject--the independent thought or invention of cultures, technology and art that have occurred through the ages. I'm not thinking about that large a connection. I'd just like to know if mine was independent or subconscious.

Oh, the James Garner thing: I have always loved him. Watched and loved Rockford files. Saw that it was scheduled to be remade as a TV series with Dermot Mulroney as the Jim Rockford character. Everything old is new again?
Posted by Vicki Gill, potter at 10:52 AM 3 comments:

Mosaics on the outside 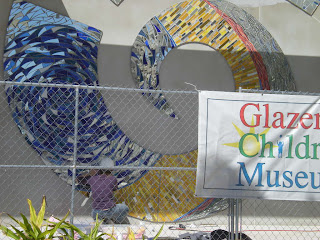 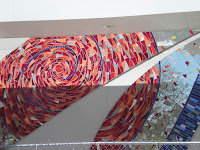 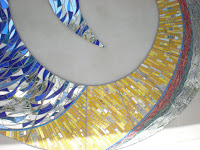 These are images of a beautiful mosaic being installed at the Children's museum, next to the Pen-Free Tampa Museum of Art. Hope the kiddies get more respect from museum management than their parents do! Anyway, I got to stop and chat for a few minutes with a woman who was helping the artist do the installation. She said they did the pieces at a warehouse, using Wonderboard as the backer for the mosaic. When I saw the panels, they were already mounted and I could see screwheads that were being covered up by glass pieces, as well as some damaged glass that they were having to remove and replace. Very magical. The link goes to an article, which gives the monetary costs ($75,000) and how payments would be made ($5000 down and $17,500 over a four year period.
I don't know a thing about public commissions of installation work, but this woman had a bunch of people working with her part-time and I'm wondering how this is economically feasible unless you have a boatload of these things going over a 12 month period, enough to float your materials, living/travel expenses, hired help and the inclusion of Murphy's Law costs. Anyone have any ideas about how this works?