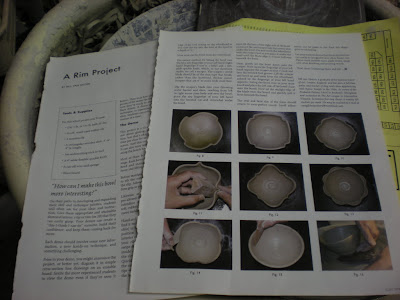 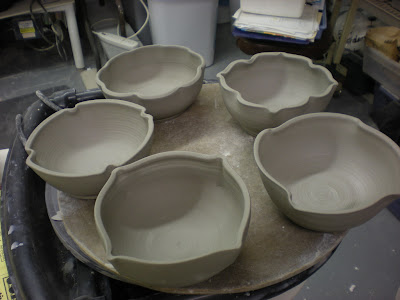 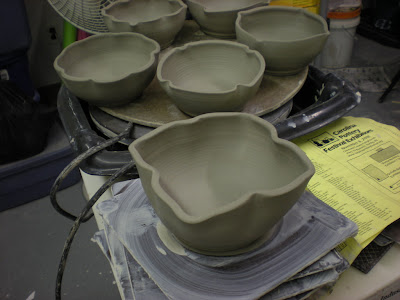 These are some new bowl shapes for me. As you can see from the top photo, I went through my old pottery magazines and pulled out things I wanted to try. Since I am making bowls for the Cleveland Co. Bowling for Dollars event this month, I thought I would do a little experimentation. Don't know how I will glaze them, but think I'll keep it simple and let the form speak.
I started cleaning the studio back in August, 2010. This past month I finally got all the things that I had decided I wasn't going to use either sold, donated, or thrown away. It felt really good to have more space. In the midst of the cleaning I found some things that had been buried. These included:
Photo light stands
Bags of glazes that I wanted to experiment with and had never gotten into liquid form (copper reds in oxidation, slip glazes, an oil spot glaze)
Second, third, and fourth replacements of needle tools, scratch tools, trimming tools
Chamois
Lamp parts
Glass containers
Reduced my magazines down to a handful and plan on trying out new things every month from the clippings. Kind of a self enforced workshop.
The clean up also spawned new projects in the studio. Currently working on a plaster table for recycling clay, a new soft light box and a speedy set up for the light box for taking on the fly photos. Well, that's the update on what's happening at Bluegill. Got a show in Mississippi this month and hope to get some photos of glazed pieces before I leave for that. Stay tuned........
Posted by Vicki Gill, potter at 9:09 PM

I to have way toooo many stacks of old mags. I don't think I've seen that van gilder how-to on bowls though. Your bowls look fantastic. Don't suppose there is a date or month on those pages. If there is would you mind posting it. Thanks....I'm a potter from west TN who lives close to the MS line and also went to school at OLE MS so welcome!

I am enjoying using the items I purchased from you during your "cleanup". I just used some of the forms last week and I use the stamps often. I look at the magazines almost daily.

Dear Judith,
It was a Jan/Feb. 2005 edition of Claytimes. Hope that helps.

Dear Judy,
Glad you're having fun with those forms!

Vicki,Thank you so much. I found the mag. Now I'm going to try this.

OOh I love the shapes. Looking forward to seeing how you glaze them.

Thanks Cazz,forgot to do the follow up and shoot pictures. Will try to get some shots up.