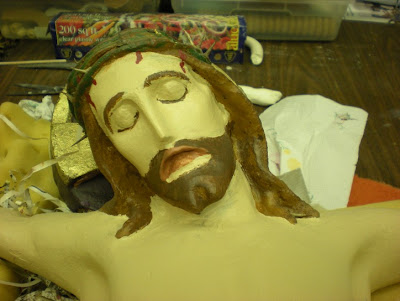 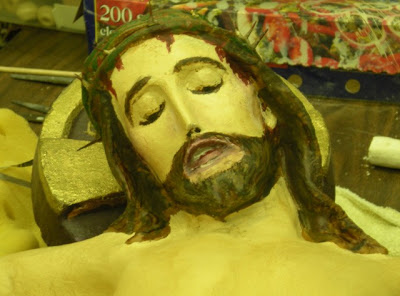 Sometimes you are asked to do "odd" jobs because you have artistic tendencies. A lady contacted me back in the summer about "fixing" a crucifix for their church. I told her I would be happy to look at it and when she brought it, it was in a box that was 40"x48". It was a turn-of-the century statue that had been removed from it's cross for cleaning, gotten left outside and the arms and legs had broken off. They had already had it repaired and appendiges reattached, but wanted more color and detail added to the plaster work. I said I would try, did a bit of research on the internet and became terrified that I would mess up the restoration work if I "fiddled" with it. So it has sat, awaiting a return of courage.
On Monday I darkened the skin and added facial detail and toned down the hair and beard. Yesterday we moved the statue out of the studio and on the road back to the cross and display in the church.
It's funny sometimes the things you are asked to tackle, isn't it? No, it's not functional pottery, but it is something that definitely has a function and purpose and now it is going back to it's "use".

Email ThisBlogThis!Share to TwitterShare to FacebookShare to Pinterest
Labels: Crucifix returns to use, odd jobs

Hi Vicki,
So nice to finally see your work after all these years. Isn't it amazing what you can accomplish by just starting on something? This is beautiful work and I am sure the church is very happy with it.