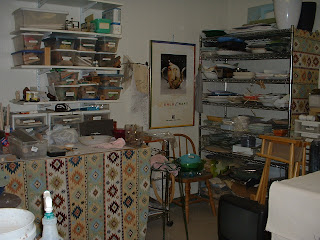 I thought I would show a section of my workspace at the studio. Behind the wild fabric are two rolling carts with more forms that I use in handbuilding. The plastic shoe boxes hold texturing materials and on the large metal rolling rack are more forms. You can just make out the edge of my slab roller.
Of course, I expand to fill any space, so I usually have things on every flat surface, not only in here but in the handbuilding class room and in the storage area, which doubles as a bathroom for the studio.
I took some shots of the areas of the studio for the Claymatters meeting in April. A lot of those folks haven't been to the studio and I thought I would give them a rough idea of what it looks like.
Today I finished up a kiln firing with promised gallery work in it. Fingers are crossed because I had to mix up new blue and green glazes and fire without testing first.
Tomorrow will be a road trip to the Potters Conference. I've got my bag packed and fresh notebook ready. Hurrah!
Posted by Vicki Gill, potter at 9:44 PM

Email ThisBlogThis!Share to TwitterShare to FacebookShare to Pinterest
Labels: workspace in studio