How I get inspired 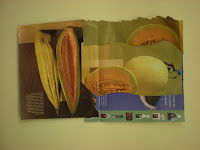 I originally went to college as a fine art major with an emphasis on painting and drawing. I struggled for inspiration, technique, subject matter, etc. all through school as far as painting was concerned. I just could not seem to find a way to paint that felt right and that I would be happy exploring for a while. I didn't pick up a paintbrush for almost 23 years. Did take a foray into clay, however. So in 2002 I decided to do some large paintings for Jim's new veterinary hospital and really enjoyed that. Subject matter was animals, of course, so I didn't have to THINK too much.
Since then I figured out a way to start a painting without a lot of angst. Since I want to explore color and some form without being representational, I take photos from magazines that have colors I like, then move the pieces around until I have a color balance that I like. The image above is what resulted in the painting below.
Of course, it changes a bit every time I work on it, since I use acryllics and the end is only similar to the beginning. I have several of these "inspirational" collages so the next time I want to start, all I have to do is start! I guess a sketchbook for pottery is a similar idea. 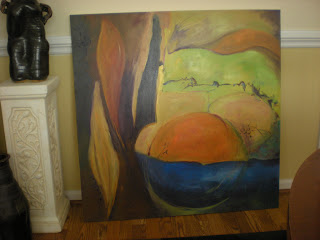 I think you should put some painting in your shop! I love that!

I love the way the painting came about from the collage. I would have never thought of that! Makes me want to pick up a pint brush. You should do more painting,this one is lovely!

Saw your paintings and I agree with Jen, you should do more of them. Interested to see your inspirations from Australia

Love the color in your paintings and your inspiration technique is wonderful.