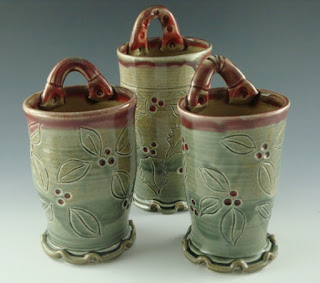 These are some holiday designs I'm working on. The wall pocket vases are a design I started about 2 years ago, combining a vase with a wall hanging container. They also are great for pencils, utensils, etc. One lady told me she put her glasses in hers so she knew where they were.
Posted by Vicki Gill, potter at 10:06 AM No comments:

Wisdom from the Life of Pi

Don't know if you've read Life of Pi, a novel by Yann Martel, but I highly recommend it if you haven't. I was so taken in by this book that I had to do an internet search after I read it, trying to get more data on the story itself and the background of the story. Anyway, won't reveal anything of the plot.
One of the things I like is a forward or Author's Note. When I got to the end of the Author's Note in this book I was moved to tears by the following quote and have taken it up as an artist's banner of what this world might be without artists and their visions:

If we, citizens, do not support our artists, then we sacrifice our imagination on the altar of crude reality and we end up believing in nothing and having worthless dreams.  Yann Martel, Life of Pi

This nice mention in the Artist Corner of September's Carolina Women Today magazine was courtesy of my friends Randy McNeilly and Janet Workman Berry. It was a fun afternoon with them in the studio. 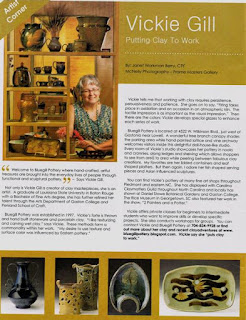 Wow, time did a warp speed jump on me. One moment there were loads of golden days of summer ahead and the next moment it is chilly in a lovely way in the evening and Indian summer during the day. I love the surprise of the leaf color changes and the smell of wood smoke in the air. 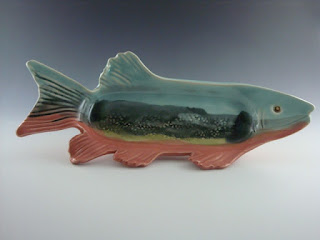 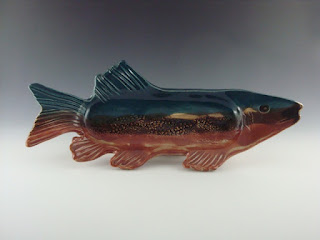 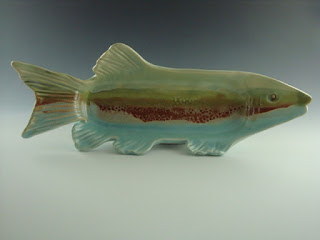 I've been busy with lots of new colors and some new designs. I have been working on these platters for a gallery in the Northeast. They're a larger size version of some fish trays I have been making for a long time. Having lots of fun on them.
Posted by Vicki Gill, potter at 4:33 PM No comments: