Sometimes you just have to be flexible 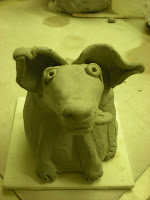 I had a boy scout troupe coming last Thurs. evening to work on a project for their art badge, so I figured out what I thought we could accomplish in a little over an hour and had made a model of a dog sculpture that they could make from 2 pinch pots and some additions of clay. I figured I would give them a choice of whether they wanted it to be a bank or a rattle. Simple.
Well, the guys arrived and I started to describe what we were going to make and their originality quickly asserted itself. They thought the dog idea was fine, but each one had an idea of what they REALLY wanted to make. So..............breathe deeply and become flexible. They did an awesome job and seemed to have a good time, too. Cherokee was a big hit. Everyone got to pet him and I swear his skin was probably tender from so much love! 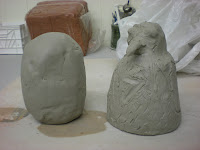 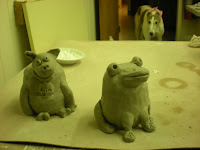 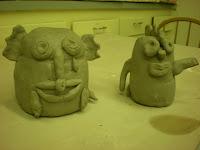 Elephant and Hamster with mohawk

They do all rattle though! 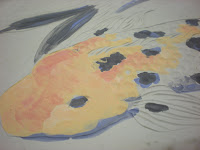 A bone dry Koi tray that I have done the underglaze work on. The underglaze colors are very deceptive because they look washed out. However, once they are fired they will really increase in vividness. I'll try to get a shot of them at that stage so you can see the difference.
Next it will be bisque fired, then glaze applied and wiped off and other layers of glaze applied. This is a simplification of the way I first started making these trays and I am very happy that I changed my process. I used to put the underglaze colors on at the bisque stage and really had to juggle not wiping the color off as I tried to glaze them. And if the color is not vivid enough, I have another chance in the bisque stage to apply more. 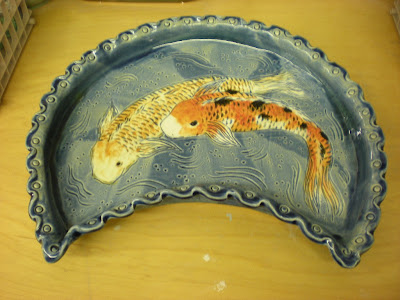 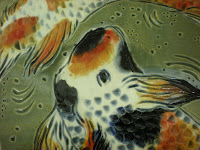 Detail of finished piece below.
This shows how I appled green glaze all over the piece then wiped it from the fish images and brushed on clear glaze over the fish. The green glaze went into the carved areas and it's color is changed to a steely blue when the clear goes over the top of it. 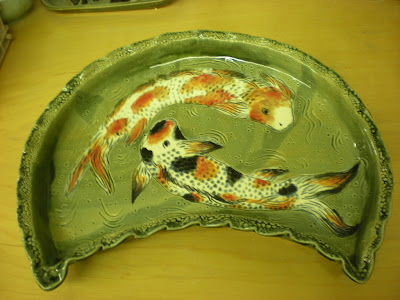 These will be heading for a gallery in Massachusetts as soon as we work out the details of the rest of the order.

Posted by Vicki Gill, potter at 7:58 PM No comments: