A selection of work recently sent to Grovewood Gallery, in Asheville. It was one of the first galleries to carry my work and I really love the Arts and Crafts design of the gallery and the Grove Park Inn, where it is tucked behind. Many works have found their way into the hands of pottery loving people over the past decade from this great gallery.Grovewood Gallery, a great place for art and craft.﻿
Posted by Vicki Gill, potter at 9:17 AM No comments:

I was working on some experimental pieces when I was visiting my mom and dad. Yes, I brought clay to  a family visit because I was on a tight deadline for shows and orders. This is a type of envelope vase (very narrow) that I had been thinking about. Sadly, it survived the drive home but the top section was loose and had come detached from the base. I went ahead and propped it up and plastered it with a lot of glaze, hoping for the best. From the top shot you can see that the propping up wasn't successful and it now has quite a drunken tilt to it. There would be a whole lot of people who would argue that it would have been better to start over, rather that fire it. But I disagree. This crazy, tilting vase is still artistic fodder for new ideas, structural changes I need to take into consideration next time and the "What if?" factor of inspiration it can provide me in the future. And at the very least, it is the warning not to spend a lot of time on pieces when you have to transport them 600 miles in the trunk of your car.﻿
Posted by Vicki Gill, potter at 7:30 PM No comments:

Look up. There's beauty above you. 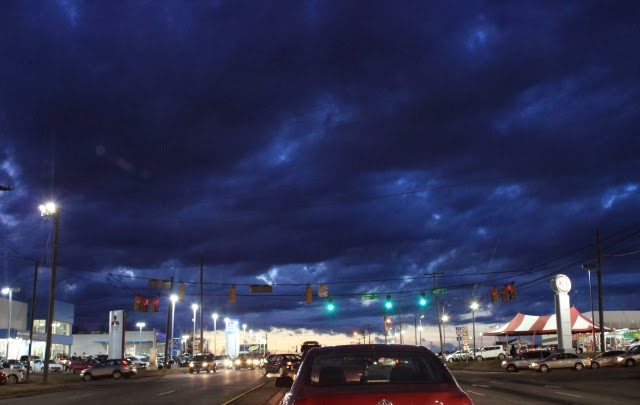 Caught this moment on the drive home from the studio. Waiting in the turn lane is usually a several light occurance, so I have plenty of time to look around. Had the camera in the front seat and was able to snap a few shots of this incredible sky before my car was able to inch forward. There is clear sky at the bottom of the clouds. The colors were incredible.﻿
Posted by Vicki Gill, potter at 11:30 AM 2 comments:

Email ThisBlogThis!Share to TwitterShare to FacebookShare to Pinterest
Labels: Evening clouds, standin in line at the traffic light

I thought I would write about the back scenes that can lead to a bit of artistic trauma and a whole lot of DRAMA. If you saw the last post, I had new work for the show in Shelby. But prior to that happening, I had a wonderful timeline of making work and firing and finishing work that would lead up to a calm, effortless setup. Ha!
The weather has played havoc with my firing because of temperature. My kilns are outside, under a shed roof and have computerized controls, which are not supposed to work as well when the temperature drops below 32 degrees. So that lovely timeline got to be a scramble, fire to the last minute possible.
Then the setup.....Shelby is about 25 miles from my studio and Tuesday, set up day saw me struggling to get my old setup in the car and get there in time. Unpacking quickly in the rain was going ok until I got to the last table, which got stuck in the van. It has legs that are permanently screwed to the top and it pretty unbendable without breaking. I must have stood in the drizzle in the parking lot shouting at this table for 10 minutes. They were not pretty words, either. My sister later said it was probably caught on a surveillance tape somewhere and people got a good laugh at the struggle I was going through.
Finally I manipulated it so I could squeeze it out without snapping all the legs off. Then off to the races of unpacking and setting things out. But only half the things, because the other half was still cooling in the kilns.
Yesterday I left several hours early, unloaded the rest of the pieces in a whirlwind and finished the setup just before 5:00pm. Only time to change clothes and put on my smiling face before the excitement started.
Show was lovely and all the work looked great and pieces sold, so good ending to the trauma/drama.﻿
Posted by Vicki Gill, potter at 8:45 AM No comments:

Preview of work at Treasures of the Earth Show Opening Tonight 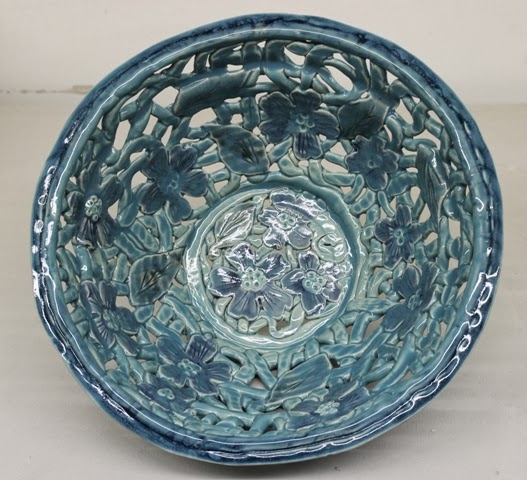 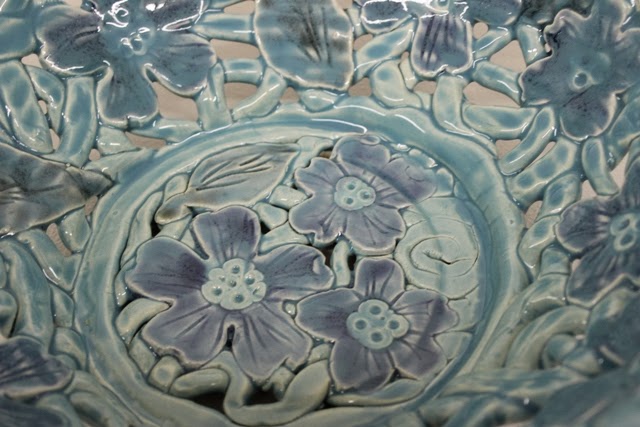 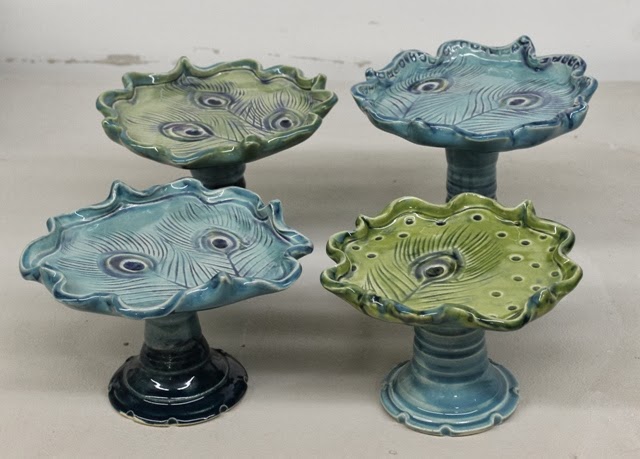 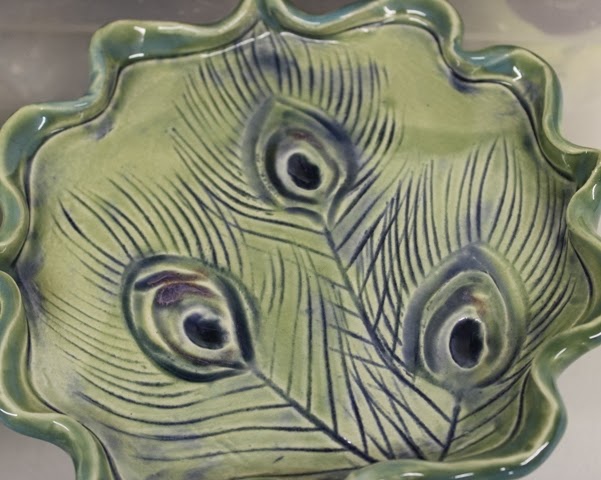 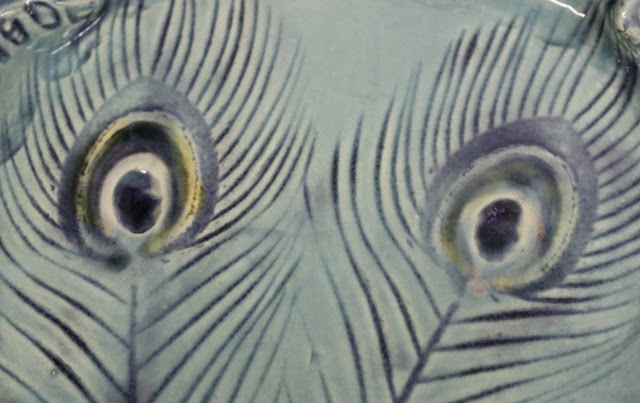 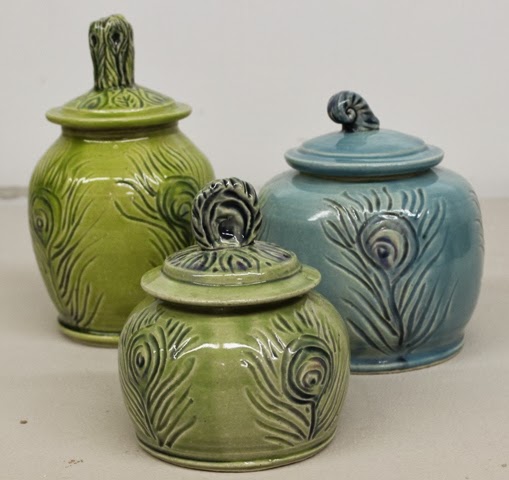 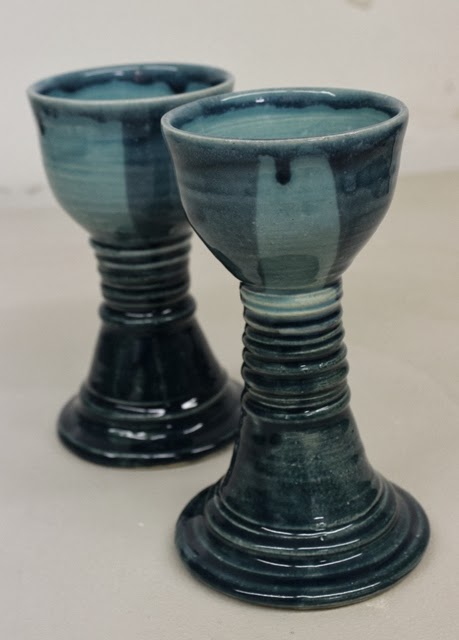 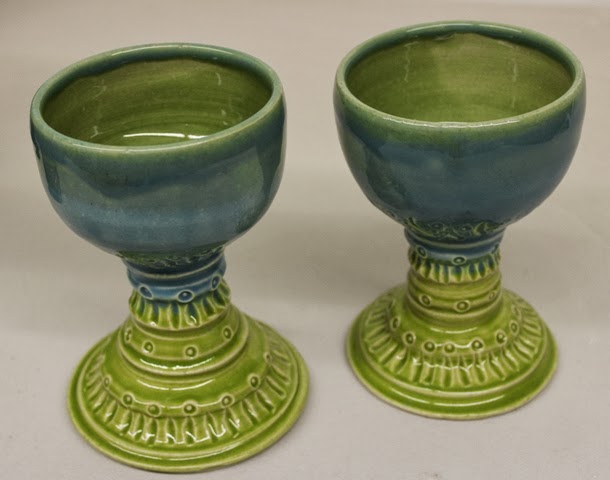 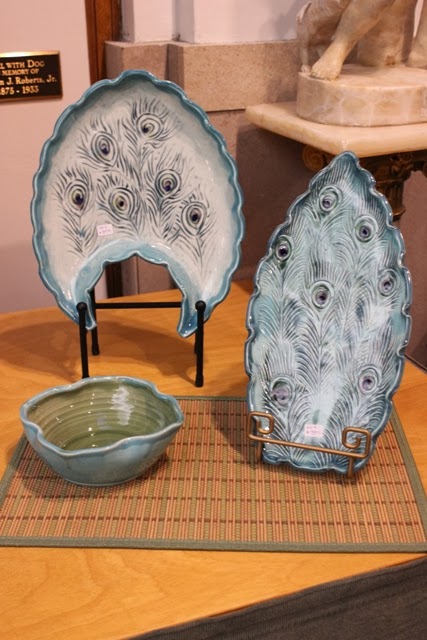 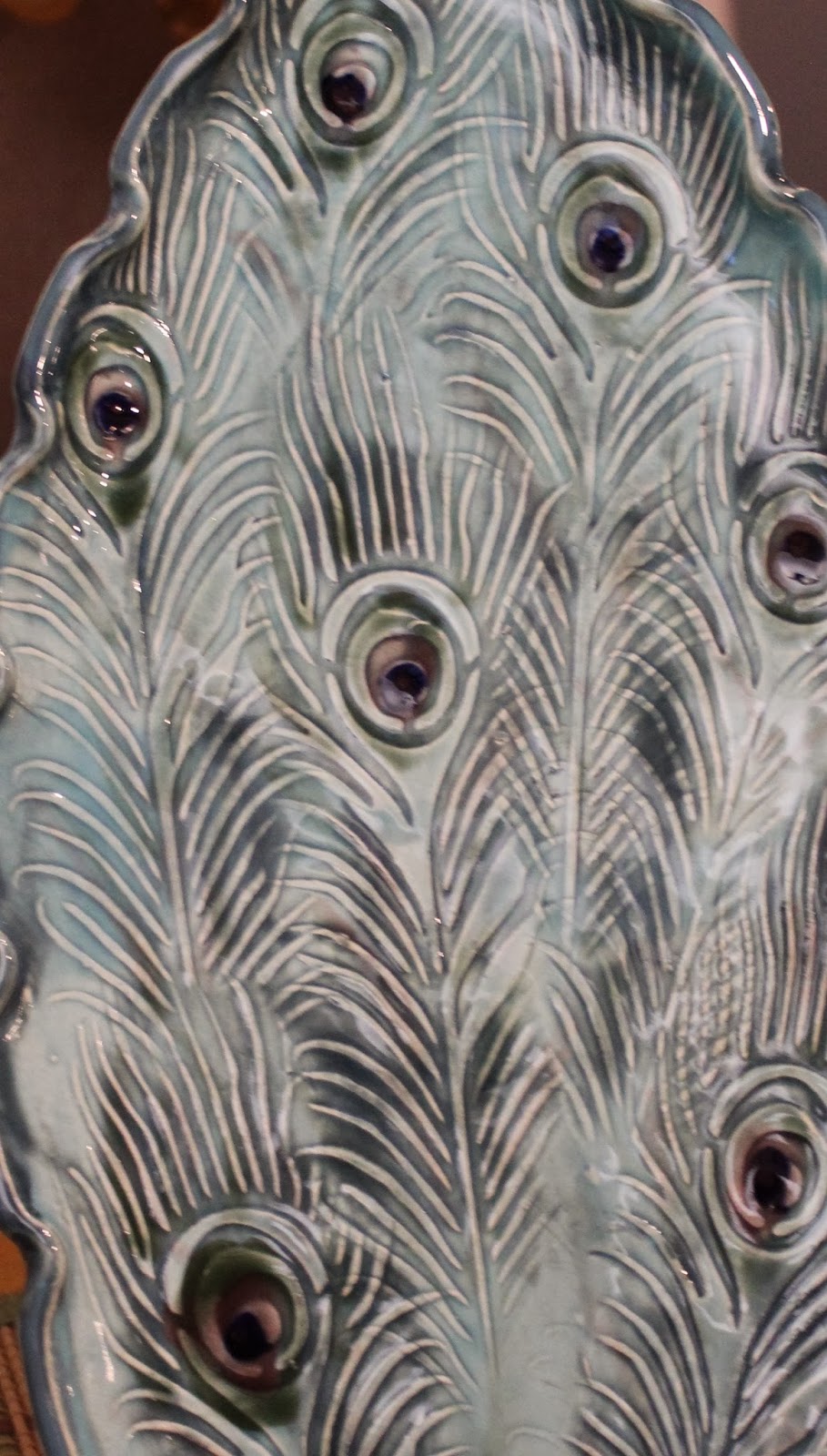 Obviously this isn't all the work. And some of it was photographed quickly as it came out of the kiln, so the colors are brighter in person. I will have big carved bowls and vases and altered bowls and little brilliantly colored leaf bowls and even some little valentine tiny bowls for those needing to give some love. Come out and see if you can. Shelby is a great town with lots of exciting things to do, so it's worth a day trip. The show will be up to March 6th.
Posted by Vicki Gill, potter at 10:49 AM No comments: