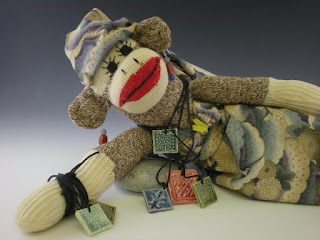 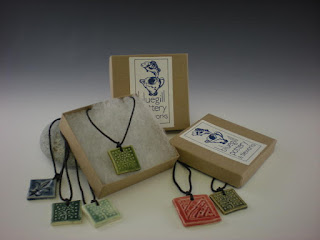 Been working on some shots of these little pendants that I make. I have been using some new glazes and wanted a nice funky photo, so that's where Sock Monkey comes in. This is a sock monkey my grandmother made for one of the children. I have changed the sex (I think), because originally this monkey had little fuzzy furry looking doodads on it's legs. I temporarily removed the said "doodads" (which is Southern speak for a rather useless piece or thing that you know not what to call, but have to give some designation). Got her (him?) all decked out in beach finery, posing with all this pottery bling around her (his?) neck. The other shot shows how I intend to ship these pieces to arrive at a lucky person's door.
Posted by Vicki Gill, potter at 10:29 PM