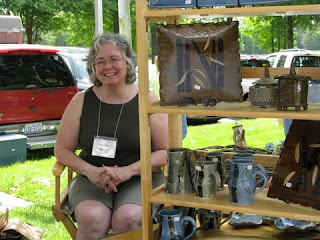 Here a pix of me that Alex Miller took during the Barn Sale. Thanks Alex! The weather for the sale turned out nice and there seemed to be a nice crowd out. I did get sunburned on one side because of the layout of the field. Lots of great comments on the beehives for storing your knitting at home. Thanks to all who came out!

On Sunday we drove to Lake Lure to see my family. They have a week at some condominiums there, so I saw my sister and brother-in-law, my mom and dad, and two friends, Jean B. and Jean P. We had a great time and my jaw and cheekbones were sore from laughing so much. At several points the noise level reached critical status as three or four conversations were going on all at once.

Spencer, our musician son, had a concert with his band, Tides of Man, in Orlando on Saturday. He said it went well and they had some fans drive over two hours to see them and get their autographs. My comment to Jim was that it was tough to think about Spence having chosen such a hard profession to break into, and what hard work and constant effort he would have to put forth. Jim just looked at me and laughed, and said, "You're one to talk about hard professions!" It's true, pottery probably is one of the more challenging mental and physical art/craft mediums and can wear on your body and mind. But there can be such magic when everything holds together and goes right. I'm just glad Spence is in his twenties and has a lot of stamina, because he is going to need it! I'm off to the studio to unload the boxes and set everything back up in the studio.
Posted by Vicki Gill, potter at 8:45 AM

So True about being a potter. Infact on Saturday around 4:30 while I was about to fall over tired I was thinking just that!( Of course it did not help any that I had'nt brought with me a decant lunch and stayed up way to late the night before and got up 4 times to quick cool a kiln that morning). Spence may have it easy!