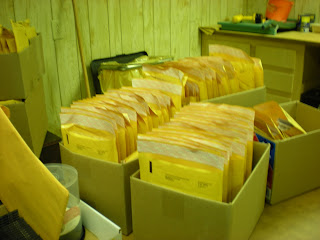 This was a scene from the stuffing of PR packets for the Carolina Pottery Festival, along with potters' packets of post cards, info sheets, etc. A behind-the-scene look at the glamorous things the Board of Directors does throughout the year to promote the Festival! My local post office secretely groans when I bring in packets 100 or so at a time to individually weigh.
On the studio front, yesterday was a long day and my body is protesting heavily this morning. It started at 8am with getting pots ready to be photographed and ended at 10pm with getting the last kiln loaded and ready to go.
On the up side, I managed to squeeze in a short visit to Ron's place after the photo shoot. Kind soul that he is, he gave me charity tomatoes because ours are just not going to produce anyting large enough to make a tomato sandwich with. Today I shall feast at lunch! Thanks Ron! I also got to see some more new pots in person, which look really cool.
On a parting note, this was an image Jim took when we were driving through West Virginia several weeks ago. I'm going to take that piece of big sky and rolling hills with me for inspiration at the studio today. Have a good day and eat some local produce!