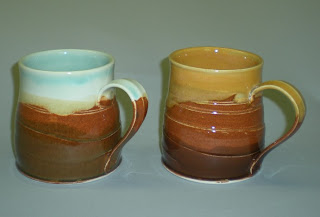 I have been working with some new combos of color and these are samples of the ones I like. The one on the left is something I have played with for a bit, but was using a glaze called Plum, which had bone ash and settled to the bottom of the bucket like no one's business. Sometimes it would crawl and sometimes it would do the most beautiful things. Very finicky. I put my foot down and decided no more plum. Instead I have been using Nutmeg (found in CM last year or so). To date it is a nice reddish brown which plays well with other glazes. I am laying 3 different colors on each mug. I fire to cone 7 on a white stoneware.

I've called the left combo, Horizon, because it reminds me of the mountains. The right one I'm trying to figure out a good name. If you have suggestions, please post. My friend, Randy McNeilly, said it reminded him of Chaco Canyon and I can see that. Anyway, a nice name would be good, instead of Altered Mexico Point Green/Nutmeg/Trimix or Altered Creamy Orange/Nutmeg/NTA. Somehow those just don't cut it for folks buying mugs, but make perfect sense to me, of course!

I love the combo on the left. Looks like a pale blue green. Sort of celadon? Really pretty.

Thanks Patricia! It is a very pale blue green, but I fire in oxidation, so no true celadons for me, unfortunately.