Glaze development, also known as the search for the holy purple 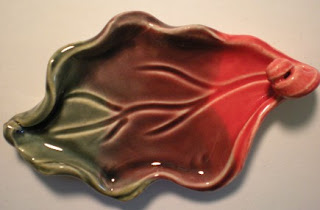 This is a little kiln filler that I used to test an overlap of two glazes. Green plus red makes purple in my glaze universe. How could this be, you say? Well, the green glaze does have some cobalt in it. I tried a blue and red combo first, in case you were thinking I started off doing things the hard way. Apparently the cobalt in the blue glaze was too strong and pretty much just looked blue in the trial.

These are also kiln fillers, original red at left, green at right. In between you see a red variation at middle left, which was taking the red, adding some clear and adding some very pale light blue in the hopes of a pink. Needs more work. At middle right is the liquid combo of the green and red glazes. On the leaf above I simply dipped one glaze, then overlapped the second. Here I have taken a small portion of green and mixed an equal portion of red. This method makes for lots of small containers all around the studio. Good labelling is essential for recreating your experiments using this method. I will try adding just a bit more red. I haven't gotten the color I want yet, but this is the closest I have come to it so far. 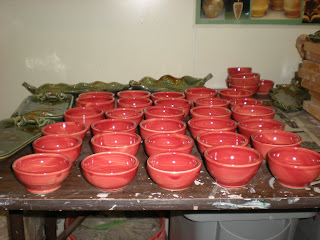 This is a shot of the 30 small bowls that went out of the studio for an order this week. I did a little color enhancement to the image so they are not this VIVID.

If you really are seeking out a purple... drop me a line. They arent hard but most glaze bases prevent the really rich purples from coming through. Even with Mason stains purples can be a pain.
check this out: http://tinyurl.com/5haajq